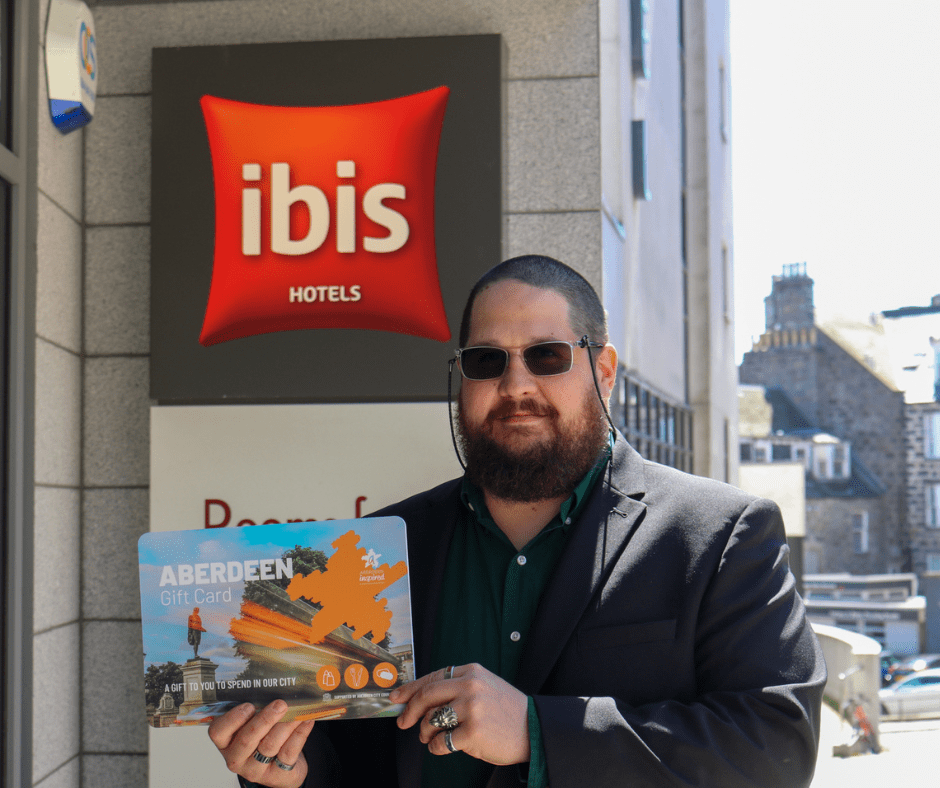 ibis Aberdeen Centre – Quayside has made a public declaration of support for the city, choosing the Aberdeen Gift Card as its main reward for staff

A city centre employer is encouraging organisations to think local for its staff rewards and incentives. Vincent Amsoms, General Manager at ibis Aberdeen Centre – Quayside, has chosen the Aberdeen Gift Card as the hotel’s main staff reward, and believes it’s a way that employers can make a positive difference to the city’s high streets:

Aberdeen Inspired launched the Aberdeen Gift Card in November 2020 and has locked in over half a million pounds of spend to the local economy since its launch.  In total nearly 13,000 gift cards have been bought totalling £505,000 in gift card sales since the launch of the programme. Aberdeen Inspired launched a digital version of the gift card in January 2022 and the number of business which accept the card now stands at over 220.

“Having a mix of national and independent brands as part of the Aberdeen Gift Card appealed to us as an employer using the cards to reward staff,” adds Vincent. “Employees have hundreds of businesses in Aberdeen to spend their card, from national brands like Primark and Boots to smaller independents like Grampian Health Store, Books and Beans and The Grill. Our team is diverse with lots of different interests, so the more choice and variety, the better for my team.”

ibis Aberdeen Centre – Quayside  is the latest city employer to show its support for the Aberdeen Gift Card, with organisations such as Shell, CNR, Aberdeen Performing Arts and Aberdeen Harbour Board choosing the local gift card for their employees.

As organisations begin to think about Christmas rewards for staff, I urge them to think local

Adrian Watson, Chief Executive at Aberdeen Inspired said: “We’re heartened to see ibis Aberdeen Centre – Quayside thinking local first with their team rewards. With the support of Aberdonians and employers across the city, we’ve been able to lock in around half a million pounds into our economy, and give employees rewards that are truly valued.  Every Aberdeen Gift Card purchased is an investment in our city. As organisations begin to think about Christmas rewards for staff, I urge them to think local.”

“Employers appreciate the mix of national and local businesses within the Aberdeen Gift Card, and the new regional Scotland Loves Local Gift Cards, because they represent unbeatable local choice for their staff. Added to that, the process of ordering is very easy. Organisations can receive all of their gift cards at once for distributing to staff at a specific time. Or they might prefer to keep a stock of gift cards at their workplace that we can activate to a set denomination on request. This option works well when organisations want to use the gift cards for different staff incentives through the year, such as how ibis Aberdeen Centre – Quayside has chosen to use the Aberdeen Gift Card.”